Bunions: What Causes Them and What Can You Do About Them?

When you are moving throughout your day, an abnormality on your foot can really make the things we take for granted a lot more uncomfortable. A bunion is one of the most bothersome public enemies in this regard.

A painful, irritating bump on the side of the foot is something many people have to deal with. Some have had one for so long that they think nothing can really be done to address the discomfort they feel. Others might be afraid to ask about treatment because they feel surgery is the only option.

So what’s the truth when it comes to bunions? Who or what’s to blame for them, and what is the best approach to taking care of one? Join us on this (bumpy) journey to learn more.

What Exactly Is a Bunion?

We likely don’t have to tell you that a bunion is a bony bump that has formed at the outer base of the big toe. But what precisely is going on there?

The joint in question, medically referred to as the metatarsophalangeal (MTP) joint, has lost stability. This causes the connecting bone of the big to gradually turn outward, and the entire toe to shift inward toward the second toe.

As the toe shifts, the joint begins to jut outward and form a bump. As this bump rubs up against footwear, it can easily become aggravated. Calluses and corns can form at this site as well as any other part of the foot that has been disrupted due to the condition.

Additionally, a fluid-filled cushion against the joint called a bursa can also face excess pressure and become inflamed. This tends to make movement of the joint more stiff and painful over time.

It is also possible to develop a bunion on the other side of your foot, at the smallest toe. This is often referred to as a “bunionette” or “tailor’s bunion.” 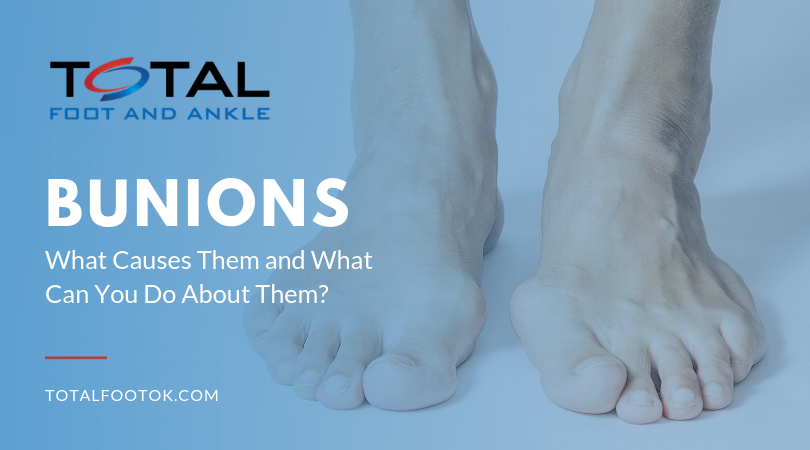 What’s to Blame for Bunions?

High heels tend to take most of the fall for causing bunions. After all, the majority of bunion sufferers are women, and many of the worst cases come from people who have worn such footwear over the course of their lives.

When it comes to causing bunions, high heels and other tight footwear aren’t undoubtedly considered to be the problem. Oh, but they certainly aren’t off the hook! We’ll get to that shortly.

Most bunions are the result of instability in the foot and the MTP joint. In many cases, this instability is believed to derive from a foot structure that has been inherited through your family. In other words, you were simply born with a higher likelihood of having a bunion.

Having had previous injuries to the foot can also contribute to destabilization and higher risk of bunion development, as can arthritis.

But what about those shoes?

It is still argued whether high heels and other shoes with tight toe boxes can cause bunions. However, there is no debate over whether this footwear can make an already existing bunion worse.

Let’s say your big toe is a fence post. If that post is buried in unstable dirt, there really isn’t much you can do about that. But wearing shoes that place pressure on your toes is like leaning on that post. It might not be the underlying reason why the post is leaning, but it’s certainly contributing to it doing so! 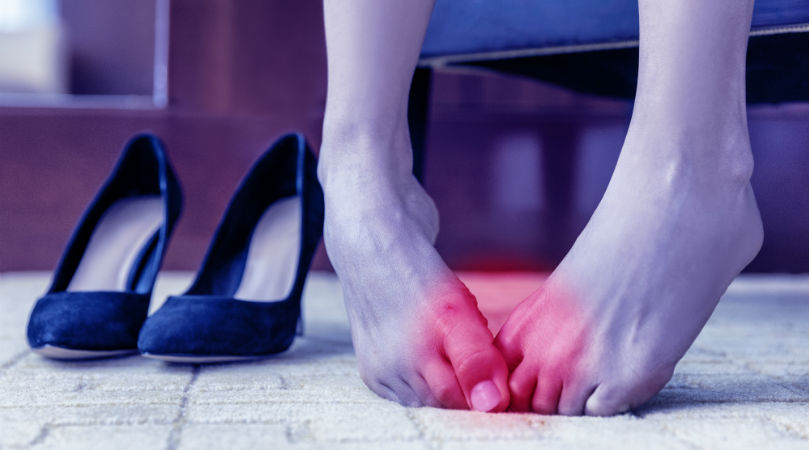 What Can Be Done About Bunions?

When it comes to treating bunions, correcting the structure of the foot is not the priority as often as you might expect.

The primary goals of most bunion treatment plans are two-fold:

Provide relief from pain, inflammation, and other symptoms a patient experiences because of the bunion.
Prevent further progression of the bunion.

There is little short of surgery that can make a bunion return to its proper place, and surgery is only a consideration if more conservative forms of treatment don’t fulfill those primary goals.

Not every bunion case is the same, and it will take a full evaluation to determine the best course of action moving forward. A bunion that is just starting to develop, for example, tends to be more flexible and therefore easier to keep in place than one that has existed for years.

Recommended treatments for bunions might include one or more of the following:

In many cases, these types of conservative treatments prove to be very effective in managing bunion progression and discomfort. If they don’t, however, and bunion surgery presents itself as a potential only option, we will be sure to discuss all the ins and outs of such a procedure with you before you make any decision about moving forward.

The Worst Thing You Can Do for Your Bunions Is Nothing

A bunion may have been hitchhiking on your foot for years, but that doesn’t mean nothing can be done to improve your quality of life. And if you feel a bunion is starting to develop on your foot, you owe yourself to have it checked and mitigated now if that’s indeed what’s happening.